Liverpool played host to HMS Prince of Wales last week, and it seemed the whole city turned out to welcome this amazing ship. We even had a bunch of brave Propellerists in a small boat, led by our intrepid photographer Al Disley, bouncing up and down in horrendous weather to beckon her arrival.

The ship is nothing short of amazing – a floating city, which is also pivotal to the growth and renewal of the Royal Navy in the years ahead. 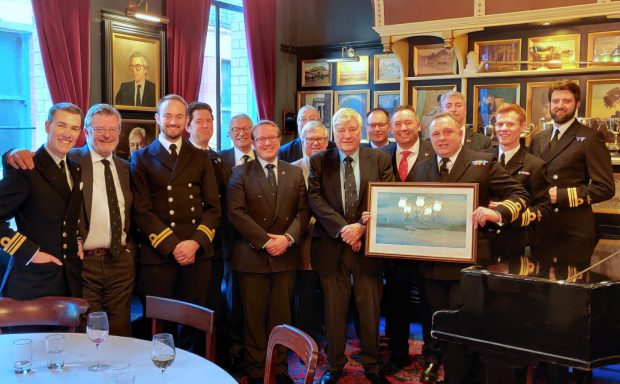 As is the norm on such auspicious occasions, the Propeller Club Liverpool pulled out all the stops. Our President Adam Whittle was on hand to welcome officers into the Artists Club for lunch, and it was a great opportunity to also hear from the Liverpool Pilots who battled the wind and the waves to make sure the city wasn’t disappointed, as the weather didn’t stop the berthing.

The Artists Club presented the group with a souvenir of the event, and this got the minds of Adam and Steven Jones whirring…a dangerous thing indeed. The Propeller Club was due to host a number of officers at First Thursday – so it was decided that we needed to present them with a token of our esteem. But what? Well, there is nothing that quite says Liverpool, like the Superlambanana – and so it was decided. However, a tourist one wouldn’t quite cut it…so a plan was hatched to make HMS Prince of Wales its own very special sculpture.

The original Superlambanana is a bright yellow sculpture, weighing almost 8 tonnes (7.9 long tons) and stands at 5.2 metres (17 feet) tall, it symbolises the trade which came in and out of our fine maritime city. Sheep/wool out, bananas in…as an illustration. As many of you who have bought presents for visitors will know, stores like Utility do a roaring trade in small versions. But they were too small for this mission. We needed something to live forever on a very big ship, so a bigger Superlambanana was needed. 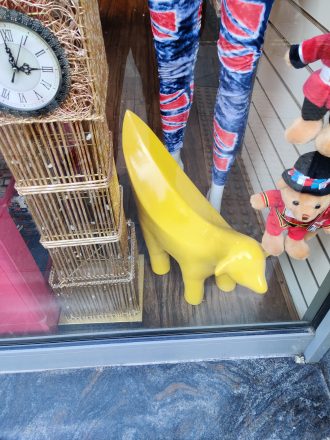 After scouring the shops, it was located in Cool Britannia on Mathew Street – a “garden” version of the sculpture – standing some half a metre high. So far so good…here you can see it proudly displayed in the window, in its yellow glory. After a little haggling, and an explanation of our ridiculous idea the store even generously gave us a discount! So hats off to them.

Again, this was only part of the story – as with a big, heavy and unwieldy model in our paws, the hard task was to get it back to the workshop, to begin the task of Propellerising the poor thing. The best form of transport, well strapped into a car seat seemed pretty good. So it’s the journey from civvie street to the military began.

Time was pressing, this was Wednesday afternoon, and the presentation was to be on Thursday evening. How on earth could this mission be successful? Well – below is the story of one man’s foolish commitment to a silly idea!

Strapped in, Superlambanana arrives for his make-over… 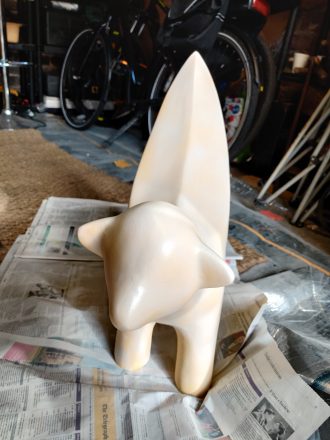 First up, sanded and a base coat sprayed… 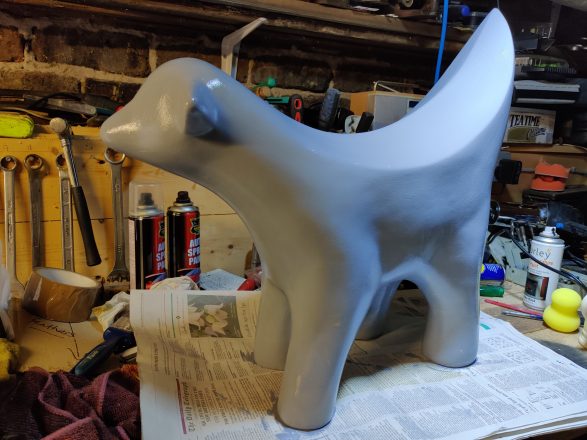 Slowly the change from civilian to RN begins – the first coat of grey. 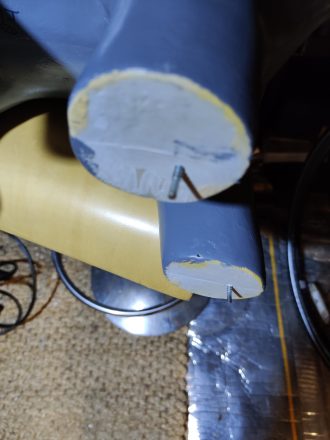 Surely it would fall over on a presentation stand you cry! Yes, hence pins in the feet, and holes in the plinth. Nothing is left to chance! 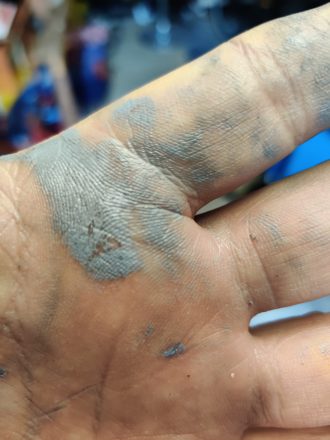 No-one said it would be easy – the clock was ticking, the fumes were thick in the air, and hands were made dirty with honest hard work. 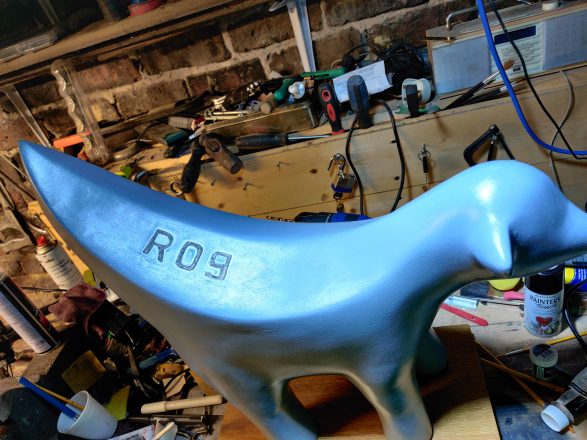 The realisation that at 0100 stencilling is harder than it might appear. A few errors, but finely, SuperlambR09 was taking shape. Still lots to do though. 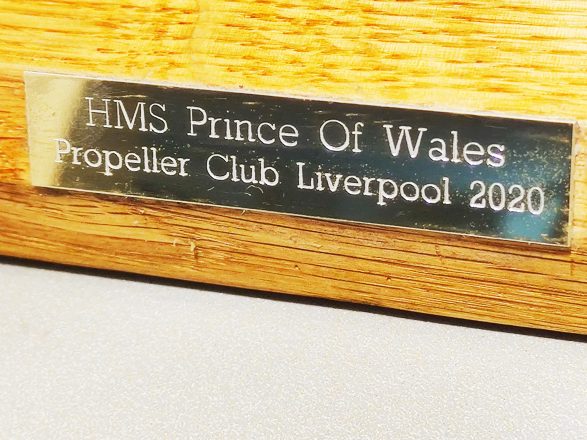 Next was the plinth and engraving – thanks to Timpsons…they rushed it through. It could be that we might just pull this off! 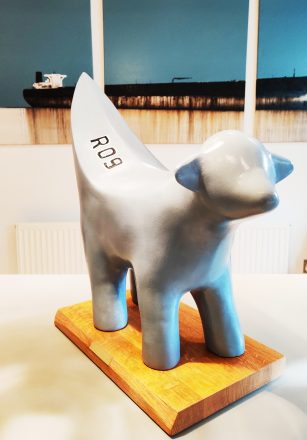 Finally, after much stress and a lot of hairdrying of wet paint – SuperlambR09 was looking good! 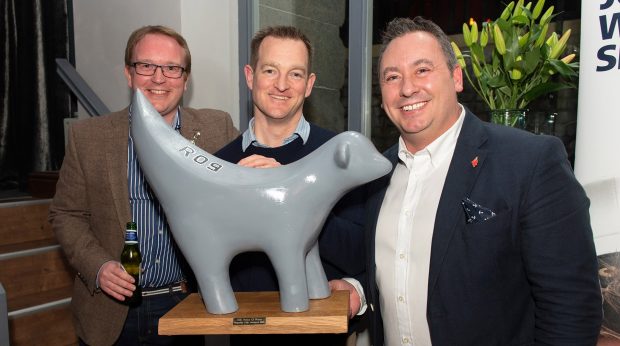 The final stage, presentation to the Royal Navy, and the Senior Officers of HMS Prince of Wales – where we hope this reminder of their first visit to Liverpool will stand as a testament to the respect and affection for the Navy, the ship, and in recognition of our bond. Liverpool that most maritime of cities knows a great crew and a good ship when it sees it. 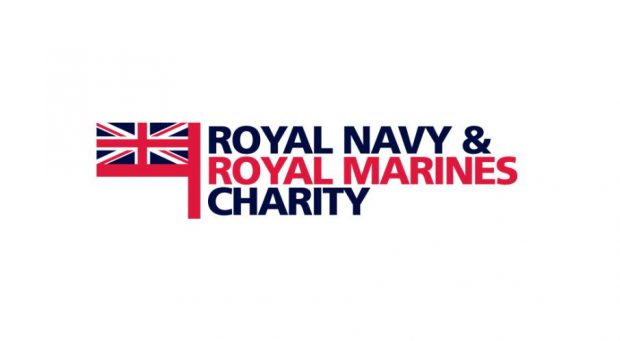 Thank you to all who attended our First Thursday, and the wonderful Royal Navy and Royal Marine Charity who hosted. See https://www.rnrmc.org.uk/ for details of their amazing work, and to support them.