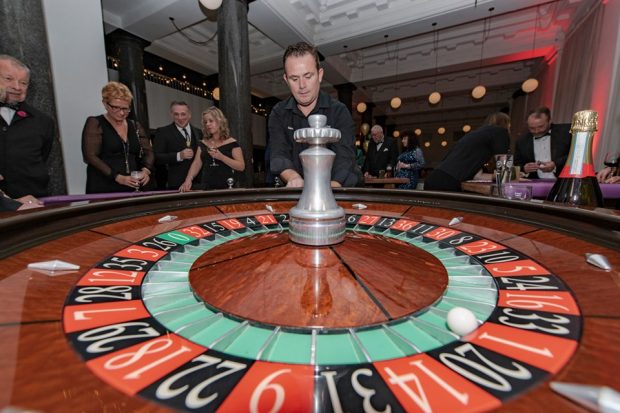 Tiring of so many lunches, and even the best of speakers, Propeller Club Liverpool decided to change things up a gear for their October event. So, away went the dowdy business attire and on went the wonderful ballgowns and black ties, as the members and guests gathered for a charity casino night.

Over 80 maritime professionals, their friends, partners and clients walked up the red carpet, and gathered in the amazing surroundings of the Old Cornmarket in Liverpool, which is now the sumptuous “One Fine Day” venue. There they wined, dined, danced and threw caution (and pretend money) to the wind on the roulette, blackjack and poker tables.

Each guest was given a £50 token which bought them chips to enter the fray. At the evening the person which the most chips left was declared the winner. There were seasoned Bond villainesque old hands who stalked the tables like they were in Monte Carlo, through to the less experienced who quickly learned that when putting everything on black, on the tables, as in life, everything can very easily come up red. 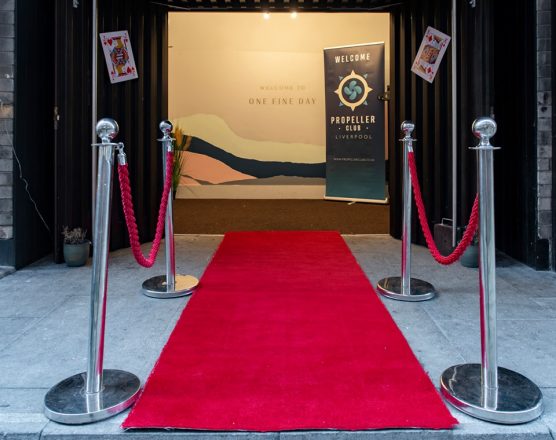 After the gambling came the gambolling, as the disco kicked in and the guests hit the dance floor. It was a thing of beauty to see so many throwing shapes on the dance floor, and whether it was the prosecco or the tunes, there was certainly a fine air of reverie and enjoyment pervading.

All in all, whether people were there for the fun, the glamour, the lure of the bets or just for a relaxed and enjoyable evening to raise funds for deserving causes, all seemed to have a wonderful time of it. This was the first time the Propeller Club Liverpool has hosted such an event, and the signs are that this could become a popular addition to the social shipping calendar.

The charities chosen to benefit were The Mission to Seafarers, and also the Battle of the Atlantic Memorial Fund. The Mission does incredible work globally to support those at sea, and from their welfare centres, pastoral visits and initiatives like We Care and the Seafarers Happiness Index they are such a vital lifeline for crews and also their families back home. You can find out more at https://www.missiontoseafarers.org/

The Battle of the Atlantic Memorial Fund is a campaign to have a lasting and fitting monument to the merchant sailors who lost their lives fighting the longest continuous battle of the Second World War. These were professional seafarers not soldiers but when the free world needed them they stepped into the fray and were the lifeline which kept Britain alive, and which eventually defeated the tyranny of Nazism.

Despite its significance, the Battle of the Atlantic does not have an overall memorial in the United Kingdom unlike other major campaigns of the war.  Thus, the project aims to build an appropriate memorial to fill that gap, and make sure the sacrifices are remembered. The memorial will be in the vicinity of the Pier Head at Liverpool. Propeller Club Liverpool is very proud to support this project, and you can learn more at https://battleoftheatlantic.org/the-memorial/

Those who attended the event were not only generous in buying their tickets to attended, they also dug deep and donated on the night, and in total almost £900 was raised, which will be shared by the charities and will go some small way to help each.

The next Propeller Club Liverpool event is their regular First Thursday maritime networking, which is (as the name suggests) on the first Thursday of the month, so November 7th at Baby E, Dale Street Liverpool from 1730 onwards. If you would like more details, then please email propellerclubliverpool@gmail.com or check out www.propellerclub.co.uk