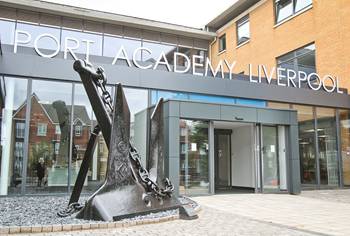 A number of Propeller Club Members were on hand to celebrate the opening of the Liverpool City Region’s new £2.5 million maritime training academy. The only one in the U.K. to create vitally needed skills and become a beacon of international excellence.

Hugh Baird College, Bootle, and its supporting partners officially launch the Port Academy Liverpool (PAL) with some 200 guests from across the U.K. representing the maritime industry, Merchant Navy, Royal Navy – both past and present – and charitable trusts.

Port Academy Liverpool will provide first class academic, technical training and enrichment courses for students aged from 14 years looking to pursue a career in all areas of the maritime sector. The first students will be welcomed for the start of term in early September 2016.

A 7.5-ton Naval anchor, refurbished by Cammell Laird, was today unveiled at the ceremony as a permanent public marker at the Academy’s entrance to its newly upgraded and customized premises.

The Academy’s location is home to much of the Port of Liverpool’s world famous docks and was the homeport for the legendary Capt Johnnie Walker and his second escort and support groups of warships, the great hero of the Battle of the Atlantic 1939-45.

This link will be celebrated by the presence of Capt Patrick Walker, Johnnie Walker’s grandson, and four RN veterans, one of whom now aged 92 years knew Capt Johnnie Walker, after joining the Navy in 1942.

Shulah Jones, Port Academy Liverpool Head of Business Strategy and Project Director, said the new facility will be an umbrella to three sub-brands: onshore, offshore and onboard, for both the Merchant Navy and Royal Navy. Career prospects for students will range from cruise liner hospitality to marine engineering.

She said Hugh Baird College of Further Education believes that, through PAL, it is the only education establishment engaging in this way with the maritime sector, which is worth £11-12 billion to the U.K. economy.

“The opening of Port Academy Liverpool is a great day for not only Bootle, but the whole of Liverpool and Merseyside,” said Shulah Jones. “This is also a far-reaching initiative which will benefit the entire U.K.’s maritime sector. Our aspiration, supported by our maritime partners, is that Port Academy Liverpool will become a beacon of educational excellence, providing first-class academic and technical training from the ages of 14 years to adulthood.

“The maritime sector is part of the DNA of Bootle and the Liverpool City Region and through the creation of Port Academy Liverpool we aim to provide training and enrichment opportunities for all. One example is the huge demand for marine engineers which we can help fill in the longer term.

“The foundations of the technical education college in Bootle were laid in 1892 and opened in 1900 by the 15th Earl of Derby. Therefore, it is very fitting that Edward Stanley, the present and 19th Earl of Derby, joins us as we look to the future.

“We will also widely promote the story of Capt Johnnie Walker, hero of the Battle of the Atlantic, who deserves great recognition for Bootle, Liverpool and Great Britain. He is one of the best role models imaginable for the ambition and commitment we are trying to achieve.”

The launch is deliberately timed to take place during Seafarers Awareness Week. The refurbished anchor, presented by the Royal Navy from its Royal Fleet Auxiliary supply ship Fort Victoria, will be dedicated ‘to seafarers past, present and future’.

A blessing of the anchor is to be delivered by Rev Dr Crispin Pailing, Rector of Liverpool and of the ‘Seafarers Church’ – Liverpool Parish Church of Our Lady and St Nicholas.

The Earl of Derby will represent the many links between the Stanley family and Bootle, evident in place names such as Stanley Road, Stanley (King’s) Gardens and Derby Park (presented in 1895 by the then Lord Derby to the citizens of Bootle).

Capt Patrick Walker has long term connections with north Liverpool as he used to attend the annual Battle of the Atlantic commemorations in Bootle, with Captain Walker’s Old Boys society. His grandfather’s wartime home, Flotilla House, is a minute’s walk from the Academy.

Capt Patrick Walker said: “It gives me great pleasure to be back in Bootle on such an auspicious occasion as the opening of the Port Academy Liverpool.

“Bootle has long had very profound associations with my family, of course. It is very exciting to think that my grandfather’s heroic exploits are now being used as an inspiration for future generations of seafarers, rather than just being confined to our maritime history.”

Commodore Doyle said, “As a proud Liverpudlian it makes me even prouder to see that our great seafaring tradition is being revived and carried forward here with this superb initiative to educate and train a new generation of seafarers.

“What better place for Port Academy Liverpool to be situated than in Bootle, which has such illustrious links as the port for so much Merchant Navy and Royal Navy shipping, not least during our darkest hours of wartime when it was the home for Capt Johnnie Walker and his second support group.”

PAL is also creating an archive dedicated to Capt Johnnie Walker and the Battle of the Atlantic and has started a public appeal for any relevant memorabilia which could be donated to this collection.